Christians Are Hated Because They Empower the Poor

... So says a wonderful article on the Christian Post website with the title of Disturbing Stories Expose Dark Realities of Persecution.

Some of the ways of persecution that this article highlight include beheadings, gang rape, genocide, imprisonment, denying citizenship, among other atrocious things.
However, what is also highlighted in this article is why the Christians are being persecuted, especially within Hindu nations.

Howell went beyond informing the evangelical leaders in the audience about the recent anti-Christian rampage in India to explain the reason behind Hindus’ hatred of Christians.

“They want to turn India into a Hindu nation, that is why Christians are hated,” the evangelical leader said.
But more importantly, Christians are hated because they empower the poor, which is the “root cause of any hatred that they incur,” he said.

Empowering the poor Dalit disturbs the caste system, which defines the group formerly known as untouchables as impure.

If you are in the mood for some good news, well, I've got some for you.  According to the Catholic News Agency website, the Italian Senate has just approved a motion condemning the persecution of Christians.

According to the L’Osservatore Romano, the motion encourages the government of Italy “to work at all community and international offices, as well as in the ambit of bilateral international relations, to ensure that the fundamental rights of persons and religious freedom are guaranteed, and that there be an end to violence and persecution fed by ethnic and religious fundamentalism in the countries or areas that are part of the world crisis.”

The motion exhorts the government to “take up an initiative that highlights the persecution suffered by Christian communities in India, Iraq and other countries from extremist and fundamentalist groups” and to bolster the international role the European Union has to play in protecting and promoting human rights and peace.

Tomorrow on Talking it Over

Tomorrow on Talking it Over with Janet Parshall, Todd Nettleton will be talking to Janet about the Internatational Day of Prayer for the persecuted church that is coming up on November 9th.

You will be able to listen online to the interview by logging on to http://www.talkingitover.org.

Todd Nettleton is the director of media development for The Voice of the Martyrs, working with the media to tell the stories of persecuted Christians to people in the United States. Todd also writes for VOM’s monthly newsletter, which goes out free to almost 250,000 homes. In his role with VOM, he has met with Christians who face persecution in Sudan, China, Egypt, Turkey, Eritrea, Vietnam, Pakistan, Indonesia, Uzbekistan, Tajikistan, Bangladesh, Ethiopia, Myanmar, Colombia and Azerbaijan. Todd and his wife, Charlotte, have two sons, ages 11 and 13.

For more information about Todd, please visit the Voice of the Martyrs Website.

The U.S. Department of State released a statement detailing its serious concern about the brutal beating of Pastor “Bike” Zhang’s sons by China’s Public Security Bureau (PSB) on October 23. They also condemned the harassment and recent imprisonment of Pastor Zhang by the PSB.

“We are gravely concerned by the brutal beating of Pastor Zhang “Bike” Mingxuan’s two sons by public bureau officials. We are also deeply concerned by continuing official harassment of Pastor Zhang, a prominent Beijing house church leader, including his arbitrary detention and the forced relocation of his family,” said Robert Wood, The U.S. Department of State, Deputy Spokesman in a press release.

Wood’s statement called on the Chinese government to release Pastor Zhang and permit his family to return home. “We call upon the Government of China to condemn the violent acts committed against his [Pastor Zhang’s] sons, and to bring to justice those individuals responsible for such acts,” the statement said. “We are concerned about a pattern of intimidation of religious freedom and rule of law advocates and their family members. We urge China to honor those international human rights instruments to which it is a signatory that protect the rule of law, freedom of expression and freedom of religion.”

On October 16, PSB officials severely beat Zhang Jian, the elder son of Pastor Bike, after they entered Pastor Bike’s home, secured the exits. The officers beat him with iron bars for nearly half an hour. As Zhang lay bleeding profusely, his mother called an ambulance. The receptionist told her a higher government authority had directed them not to dispatch an ambulance to rescue Zhang because he is related to Pastor Bike. Xie Fenglan next called her younger son, who rushed to the house. Authorities also then beat him.

“We are encouraged to see the U.S. government speaking out on behalf of this persecuted Christian family,” said Todd Nettleton, VOM’s director of media development. “We join with the State Department in calling on the Chinese government to release Pastor Zhang and to allow his family to return to their apartment.”

This incident is the latest attempt by the Chinese government to stop Pastor Bike and his family from sharing the gospel in China. In August, two days before the Olympics, Pastor Bike was arrested along with his wife and a co-worker. The Voice of the Martyrs and China Aid Association launched an international petition drive advocating for their release. More than 58,000 people signed the petition, and it was delivered to Chinese Ambassador Zhou Wenzhong in Washington D.C. Shortly after the petition was circulated and the Olympic Games ended, all three were released.

VOM encourages you to pray for the release of Pastor Bike and the speedy recovery for his sons. Ask God to protect and encourage them and all believers in China during this challenging time.

Christian Aid Worker Beheaded in Somalia for Converting from Islam 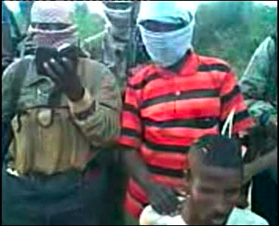 This sad news was posted at Compass Direct on Monday.

NAIROBI, Kenya, October 27 (Compass Direct News) – Among at least 24 aid workers killed in Somalia this year was one who was beheaded last month specifically for converting from Islam to Christianity, among other charges, according to an eyewitness.

National Day of Prayer for Nigeria on Saturday

This coming Saturday, November 1st there has been announced a National Day of Prayer for Nigeria that will be held at the Redeemed Christian Church of God in London.

Read the full story here.
According to the predominant religion is Islam, however Christianity is increasing. 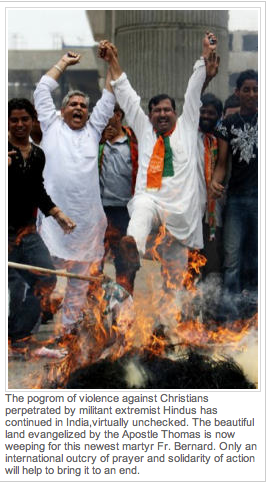 (photo credit: Asia News)
Yesterday we reminded you of the intense persecution taking place in India.  Sadly, today this story comes to us from Asia News via Catholic.org.

Archbishop Raphael Cheenath who was there by the side of the beloved Priest who had been brutally attacked by Hindu Fundamentalists said "Fr. Bernard has been given the martyr's crown."

Mumbai (AsiaNews) - Fr. Bernard Digal has died after a slow agony of more than two months. The religious, brutally beaten by Hindu fundamentalists the night of August 25, has died two months later, this evening at 9:25 local time, from the serious injuries he suffered in the assault.

Please keep the family and friends of Fr. Bernard in your prayers.  And thank the Lord Jesus for the life he lived.

The Voice of the Martyrs is mentioned in an article today on the Christian Post website.  This time VOM is commenting on the current situation with North Korea's Kim Jong Il and his recent decline in health.

Moreover, the VOM contacts claimed that five Chinese physicians are known to be in the country and assumed to be treating him.

”It is … reasonably certain that no change in the North Korean power structure has occurred, and there are no signs that such change is imminent,” stated a staff member who oversees VOM’s work in North Korea.

“Kim Jong Il rose to power through the military, through the army, and the likelihood is that regardless of what his health situation is, the military is going to maintain control,” added VOM spokesman Todd Nettleton.

“And that means that things are not going to change substantially for the Christian population of North Korea, which is so heavily persecuted by their government,” he told OneNewsNow.

You may read the full article here.

There is an article in Newsweek today that I found very interesting.  So I thought I'd share it with you.  Here's the link the the full article, and as you read it, see if you can find out if they answered their own question.  Their question is this - What's Behind the Attacks on Christians in Mosul?

Great question Newsweek, but I have a better question for you.  Why should Christians go back to Iraq and specifically Mosul, if they are still in danger of being persecuted?  The article reveals this...

“They were mostly killed after someone asked them for their identification and then learned they were Christian,” Emanuel Khoshaba Youkhana, deputy secretary-general of the Assyrian Patriotic Party, tells NEWSWEEK.

This is significant because we know that within an Islamic country  if their law is enforced, we know if someone who is Muslim converts to Christianity (as is often the case) and it is found out, there is death looming over that person and sometimes even their family.

The above quote from Newsweek, suggests to me that those who were killed may have been converts, because it was "learned that they were Christian", which means they may had been thought to be Muslim.
The article goes on to discuss what the "real numbers" of the Christians killed were...

Whatever the real number of Christians who have died in recent attacks, there’s no question that thousands of them have fled Mosul. United Nations estimates indicate at least 12,000 have been displaced. The Assyrian Patriotic Party says 2,351 families have left Mosul for Iraqi cities like Kirkuk, Erbil and Dohuk as well as Lebanon and Syria, where several hundred are living in refugee camps. The displacement follows a ratcheting up of threats against Christians, whose presence in Iraq dates to the 1st century A.D.

So if the number of Christians who were killed was 20, 8, 10 or 15 is irrelevant, the point is that there is enough terror in Mosul at this point and Christians are fleeing for their lives.  And like we've written about here before, would you come back simply because they are offering you money?

I don't think so.
The bottom line, at least to this reader, is this.  There is enough persecution in Mosul for  Christians to flee, and the government is aware of who the perpetrators are, at the very least knowing they kill Christians.  So providing families money with the promise of security may be nice, but it isn't guarantee of real protection.  And as the article closes,"..with suspicion so deep, it will take more than money and promises to woo back the city’s Christian minority."
And I can't say I blame them.   Keep on praying for our brothers and sisters who are displaced.

The last few months we have told you a lot about the growing persecution in India, and so I hope you're continuing to pray for India and the Christians there who are serving the Lord faithfully, even though they are under persecution.

One thing that has come to light is that as a result of this persecution the Christian school year has now been cancelled, this according to Spero News.

To the drama of the persecuted Christians, the devastated churches, and the burned villages, is added the "preoccupation" of students who risk losing the work of this academic year. In the district of Kandhamal, in the state of Orissa, four months before the exam scheduled for March of 2009, 40 schools are still closed or are being used by refugees and police officers as temporary housing.

And despite an investigation into the persecution of Christians, it continues and our brothers and sisters are suffering in many many ways.  Keep on praying.