Members of the church who live in the vicinity arrived at the scene and attempted to stop the arson attack and were assaulted by the mob. The attackers threatened children who had also gathered, but their parents took them away to safety. The pastor informed the police about the attack, however, they were not able to bring the large mob under control for some time, but eventually succeeded in dispersing them.

Another church in Puttlam District was set on fire and completely destroyed during the night, on Aug. 17. A group of people who visited the pastor’s house earlier that evening and threatened him is suspected of having carried out the arson attack. A police complaint has been made and three persons were arrested. Pray for the members of these two churches.

Ask God to protect and provide for these churches and provide resources to rebuild the church building. Pray their testimonies will draw their persecutors into fellowship with Christ.

The irony of this story is very interesting when you really think about it.  This story appears on OneNewsNow.com today.  The following paragraph explains it all.

He adds there is an irony to the story. "You have a church of people who escaped Vietnam and religious persecution there, arrived in the United States, saved up their money for many years, emptied their 401(k)s, their retirement, everything they had, to buy a church," he explains. "And of all places, in the United States where they thought they had escaped this kind of persecution, they were told they couldn't occupy their own church building."

Nikolai Khamara was arrested for robbery and imprisoned for ten years. Khamara watched the Christians and wondered what kind of beings they were. They were men, but they would show joy despite their suffering and would sing in very dark hours. When they had a piece of bread, they shared it with someone who had none. Their faces would shine as they spoke to someone whom Khamara could not see.

One day two Christians sat down with Khamara and asked him about his story. Khamara told them his sad tale and finished by saying, “I am a lost man.”

One of the Christians, with a smile, asked Khamara, “If somebody loses a gold ring, what is the value of that gold ring when it is lost?”

“What a foolish question! A gold ring is a gold ring. You have lost it, but somebody else will have it.”     “A very good answer,” said the Christian. “Now tell me, what is the value of a lost man? A lost man, even a thief, an adulterer, or a murderer, has the whole value of a man. He is of such value that the Son of God forsook heaven for him and died on the cross to save him.”

The Christian said to the robber, “You may have been lost, but God’s love can find you.” Hearing this, Khamara gave his life to Christ.

How is value measured? Usually by a person’s investment of time, money, or emotion. That is, how a person treats a possession, an activity, or even a relationship reveals how much it is valued by that person. Consider, for example, the difference in the treatment of old work clothes and a new suit. Or the contrast between the care for a paper cup and a crystal goblet. And when a valued possession is lost or a loved one injured, oh the tears that are shed. So, how valued are people . . . are you? As the Christian told Khamara, so valuable that Jesus left heaven and died on a cross for his lost and rebellious creatures. God loves them that much. You are loved; you are valuable. Rejoice and spread this Good News to the other “loved ones” near you.

This is a 48 minute interview about the results of this very important report concerning those who are persecuted for religious reasons.

U.S. State Department 2008 Report on International Religious Freedom Is Out 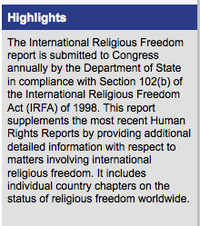 If you enjoy reading good research and reports about what is happening around the world concerning human rights and religious freedom, then you will be thrilled with the content in this report that was just released from the United States State Department on what the current state of persecution is in the nations around the world.

Here is a brief paragraph, taken from the Executive Summary, about what this report contains.

"The purpose of this report is to record the status of respect for religious freedom in every country around the world during the most recent reporting period--July 1, 2007 to June 30, 2008. Our primary focus is to document the actions of governments--those that repress religious expression, persecute believers, and tolerate violence against religious minorities, as well as those that protect and promote religious freedom. We also address societal attitudes on religion and religious minorities and record positive and negative actions taken by nongovernmental actors. We strive to report fairly and accurately, with sensitivity to the complexity of religious freedom issues."

One of the parts of this report I want to encourage you to read is the section on the Countries of Particular Concern (CPC's) (no not pregnancy counseling centers in this case :))

The countries that are highlighted for this year include: Burma, China, North Korea, Iran, Sudan, Eritrea, Saudi Arabia, and Uzbekistan.

You can read a brief summary of each of these countries by clicking here.

As an extra assignment, I want to challenge you to take each one of these countries, listed above, and pray for each one every day of the week.  Since there are 8 you can pray for two on one of those days.

For more information about the other countries in the report, please click here.

Teaching Kids About the Persecuted Church

September’s VOM newsletter features stories about Christians in Indonesia who suffer for practicing their faith in ways we often take for granted. Included are instructions for families, Sunday school classes, and individuals who want to write letters of encouragement to Indonesian Christians.  What a great project to introduce kids to the needs of their persecuted brothers and sisters around the world!

Additional information for kids about Indonesian Christians, including stories and activities, are at www.KidsofCourage.com. Each month, kid-level materials about the featured country in the VOM newsletter are added to the site. By using the newsletter and the Web site materials together, families and church groups that include kids can learn about the same country.

The Kids of Courage site also offers the opportunity to sign up for the free quarterly Kids of Courage newsletter for kids 5 to 12. This quarter’s issue features stories of Christians in Muslim areas of Gaza and the West Bank. The issue includes country information, ways kids can help the persecuted Christians, how to get additional resources for kids, and even a recipe. The first quarter 2009 issue, coming out in December, will tell about Pakistani kids who refuse to deny Jesus under stress.

Why Persecuted Saints Should Not Be Put on Pedestals

Today I wanted to offer you a different perspective on how we need to remember the persecuted church.  As I was reading an entry written by Glenn Penner over at his blog for The Voice of the Marytrs Canada, I just HAD to tell you about it because I think that we all may be able to identify with the fact that we exalt persecuted believers sometimes too much, and we forget they are human and have struggles.  Here's the beginning of Glenn's post:

One of the dangers that I have noticed in our work with persecuted Christians is the danger of putting these brothers and sisters on a pedestal, bestowing them with special spiritual fervour, maturity, and grace. We call them spiritual heroes with extreme faith exhibiting extraordinary courage. And certainly this is not without merit on occasion. And perhaps those of us who minister to our persecuted family members are guilty of portraying them in this fashion, even 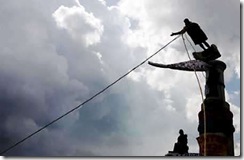 with the best of intents. But as I have experienced even today, persecuted Christians are prone to the same temptations and failures as those of us who live in religiously free countries. Some persecuted Christians commit adultery, lie, are dishonest, slander other believers, and abandon their faith in the face of violence.

And leave us a comment.  Have you exalted our brothers and sisters?

This is from our good friends at Compass Direct - Full story here.

LOS ANGELES, September 23 (Compass Direct News) – Without international pressure there is little to stop the Iranian government from ratifying a bill that will make “apostasy,” or leaving Islam, a capital crime, say human rights groups and experts. On Sept. 9 the Iranian parliament approved a new penal code by a vote of 196-7 calling for a mandatory death sentence for apostates, or those who leave Islam. The Christian and Baha’i communities of Iran are most likely to be affected by this decision. “Unless there is a coordinated and very strong effort from the international community to place pressure on Iran for this, I don’t think there will be anything stopping the Iranian government from passing this legislation,” Joseph Grieboski, founder of the Institute on Religion and Public Policy, told Compass.

(CNSNews.com) – Amid growing opposition, a campaign by the world’s Islamic nations to have international bodies outlaw the “defamation” of religion may be facing an uphill battle. The drive by the Organization of the Islamic Conference (OIC), led by members including Pakistan, Iran and Egypt, has sparked concern that the right to freedom of expression is being undermined by a group of countries, including some that enforce blasphemy laws and punish “apostasy.”

But the OIC campaign has hit a hurdle, with a new report by a United Nations expert recommending that the focus shift away from the religious defamation concept, towards one of incitement to religious hatred, which is covered by existing laws.

Governments critical of the OIC push welcomed the recommendation, but also insisted that a distinction be made between inciting religious hatred and legitimate criticism of religious beliefs and practices.

And consider this as you're reading the rest of the article.  Consider how Islamic countries persecute Christians and see if what they are asking for in this article is something you agree with.  Leave your comments below. 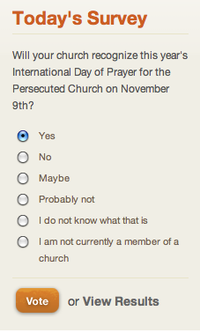 Today we have a poll over at our main Voice of the Martyrs site asking if your church is going to participate in the International Day of Prayer for the Persecuted Church.

I also wanted to tell you all about our site we made just for you, so you can learn all about this years International Day of Prayer for the Persecuted Church on November 9th.

To get you started, here is a brief version of a video that you can purchase for the IDOP for your church. Click here to learn more about the other resources The Voice of the Martyrs has for you.