WASHINGTON, April 30 /Christian Newswire/ -- The following text is a statement by the President regarding North Korea Freedom Week:

Laura and I send greetings to all those observing North Korea Freedom Week.  I am deeply concerned about the grave human rights conditions in North Korea, especially the denial of universal freedoms of speech, press, religion, assembly, and association, and restrictions on freedom of movement and workers' rights.   I have met in the Oval Office with some of the brave individuals who have escaped from that country.  I am deeply concerned by the stories of divided families, harsh conditions, and suffering.  The United States stands with the North Korean people in their call for freedom.  We believe it is every person’s basic right to live in freedom and dignity.  We will continue to support the North Korean people as they strive to achieve the rights and freedoms to which they are entitled as human beings.  We look forward to the moment when we can celebrate the blessings of liberty with the North Korean people.

Today Gospel for Asia has a press release confirming that Christian persecution has continued to increase in Orissa India since Christmas.  The most recent persecution has happened this month.

The latest attacks came April 14, when seven women from a Gospel for Asia Bible college in Orissa were forcibly confined to a room for nearly four hours. The women were sharing the love of Christ when a local government official started arguing with them. He locked them in a room and brought in local journalists to take pictures of them. Finally he forced the girls to write a letter indicating they were spreading the Christian religion in that area.

On April 5, two GFA Bible college students were attacked by anti-Christian extremists in Orissa. The two students, Dileshi Sahu and Reban Tamag, were handing out Gospel tracts and Bibles when the extremists accused them of forcing people to convert to Christianity. They stripped off the men's clothing and beat them severely. The attackers dragged one of them away and turned him over to the police.

Persecution in North Korea in the Headlines Again 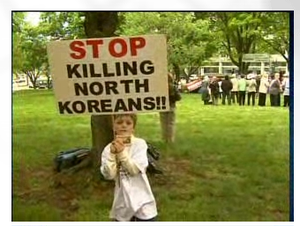 Yesterday the Christian Broadcasting Network aired a short video piece on Christians who are speaking out against persecution in North Korea.  (Remember I asked you to pray for North Korea on twitter yesterday?)

Please take a few minutes again today and pray for North Korea and also to watch the video.

Today is one of my favorite days of the week because every Wednesday we try to bring to you some items for prayer, and you and I both know that God answers our prayers.  Just yesterday we posted an answer to prayer - so let's do it again friends!

On April 14, two charges were lodged against a married couple for distributing a Christian publication in Singapore in March and October of last year that allegedly cast the Muslim prophet Mohammed in a "negative light." Ong Kian Cheong (49) and Dorothy Chan Hien Leng (44) are charged under the Sedition Act for "promoting feelings of ill-will and hostility between different races or classes of the population of Singapore." Cheong and Hien Leng were also charged under the Undesirable Publications Act, which defines "objectionable" material as an item which depicts "race or religion in such a manner that the availability of the publication is likely to cause feelings of enmity, hatred, ill-will or hostility between different racial or religious groups." The couple was alleged to have been distributing an evangelistic tract entitled "The Little Bride." Pray the charges against Ong and Dorothy will be dropped. Pray the Holy Spirit will cause them to forgive their persecutors. Pray for continued opportunities for Christians in Singapore to share the truth of Christ. John 15:18-19, John 14:1

See your prayers and letters via our Prisoner Alert program really do work!

Rejoice with us for the early release of Abraham!

Visit www.prisoneralert.com to help other prisoners get free.

Town Claims Teachers Were Killed for Their Beliefs

It happened during a midnight raid by Islamic insurgents on a the Hakeb Private English School located in the south-central town of Beledweyne. Al-Shabab is the militant Islamic group responsible for the killings. However, they claim that the Christian teachers were simply caught in the crossfire of indiscriminate shots.

Two of the teachers are British citizens with Somali origin: Mr. Daud Hassan Ali and Ms. Rehana Ahmed. The other two believers were unidentified Kenyans.

Despite the group's claim, townspeople say that the believers were targeted for their evangelistic work. Daud Hassan Ali's wife claims that her husband was singled out because he was a born-Muslim man who converted to Christianity later in life.

God's Fire Melted Away His Bitterness

“With the flames of love’s fire that Jesus kindled in my heart, I caused the ice of Siberia to melt. Hallelujah!”

Bishop Victor Belikh’s face lit up as he spoke these words. He had learned the powerful secret of letting God take over one’s heart even in the worst of circumstances. For twenty years he had suffered in the lonely prison cell in Communist Russia without a visit or news from his family or friends.

"Every evening, a simple straw mattress was placed in his small cell. He was allowed to sleep for seven hours before the mat was removed. He spent the remaining seventeen hours of each day walking circles in his pathetic little space, and if he stopped or broke down, guards would beat him or throw water on him until he continued. After twenty years of such incredible hardship, he was sent to a forced-labor camp for another four years in Northern Siberia, where the ice never melts. He survived only because he allowed the fire of God to melt away all bitterness and anger.

Belikh’s situation is rare, but his resolve through Jesus Christ is available to everyone who suffers. Jesus stoked the fire of love in Belikh’s heart—a godly furnace that was able to keep him warm for twenty years.

Fire. The mere word ignites powerful images. It implies danger when shouted in a crowded building. It embodies comfort when camping on a frosty night. It is connected with strong emotions during the “heat” of the moment or a “fiery” temper. Fire is also used to refine and to harden metals through the smelting process. Fire illuminates and consumes darkness. In all these images, one thing remains constant. Fire is associated with change. Like an encounter with fire, an encounter with God is life changing. Has the fiery love of Christ ignited, sustained, refined, comforted, and ultimately liberated you as it did Belikh? Human cruelty can never extinguish the flame of God’s love. Is the flame of God’s love alive in you?

We'll be sharing thoughts and scriptures and other things regarding the persecuted church.  Please join us!

Recently, we here at The Voice of the Martyrs, were notified by a reader who told us of a great way they are promoting the Voice of the Martyrs Prisoner Alert program. The church doing this is Calvary Chapel Murrieta and what they are doing is highlighting one of the prisoners on a special card they are printing up and giving to their members. An example of a card is below. I think this is very cool. 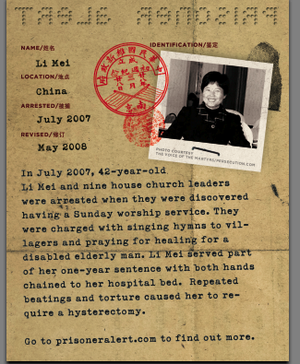 Imagine being a Christian in America and being arrested for simply printing bibles or Christian material.  This is an awful story on so many levels, but the reason I'm sharing it is because not only is the husband of this precious family suffering, but so is the whole family.  A previous report from the Mission Network News will give you some background from before.

Today the Baptist Press is updating this story from MNN's story from December.  Here's the beginning...

BEIJING (BP)--Shi Weihan, a Chinese bookstore owner in Beijing, has been rearrested for publishing Bibles and Christian literature during a time when a shortage of such materials has been reported in China.

Shi, a 37-year-old father of two daughters, was taken into custody for a second time March 19 and has been held without family visits, China Aid Association said in a news release April 22.

"His wife said she received no word on her husband's condition, and she has been prevented from bringing any food or change of clothing since his rearrest," Daniel Burton, a spokesman for China Aid, told Baptist Press. "She is very concerned about his health due to his diabetes and the deprivation and torture that's often used by Public Security Bureau officials on the arrested."