Persecution Blog: The Gideons International Underfire from the ACLU

The Gideons International Underfire from the ACLU 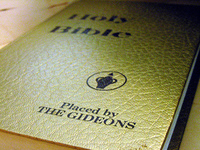 This morning as I was going through all of my email I receive and noted this  press release from The Liberty Counsel concerning the ACLU taking the Gideons International to court.  The press release said this in part:

"The ACLU filed suit, seeking to prohibit the Gideons from distributing Bibles under the policy. Judge Perry issued a preliminary injunction prohibiting the distribution of the Bible, which she described as an "instrument of religion." Judge Perry also ruled the open access policy unconstitutional under a novel (and unconstitutional) theory that it must allow a private third party the opportunity to veto the distribution request of the private applicant."  You can read the full press release here.

Then later today I read this story also concerning the Gideons from a Finnish website where the debate is whether or not the Gideon bible can be placed in hotels.  The article begins this way...

Hilton's Scandic hotel chain has recommended to its Swedish hotels that The Bible should no longer be available in their hotel rooms. However, copies of The Bible as well as holy texts from other religions in various languages will be available at hotel receptions in Sweden.

And here's the reason why.  ONE person made a stink.

The hotel chain began to remove copies of The Bible from its rooms after receiving a letter from a guest named Stefan Jansson, who wrote that a hotel should be a non-religious place, treating all people equally, regardless of their religion, the Swedish newspaper
Svenska Dagbladet reports.

On the other hand, this article also says that Finland's Scandic hotels have not taken similar measures.

"We have discussed the matter, but it has not brought about any changes", says Jouko Liimatainen from Scandic Finland.      The copies of The Bible have been donated to the hotels by Suomen Gideonit ry, which belongs to The Gideons International, an evangelical Christian organisation dedicated to distributing copies of the book worldwide.       According to Jukka Grogerus from Suomen Gideonit, no Finnish hotel chains have refused to accept their copies.       "In fact, a copy of The Bible or the New Testament has become a part of the standard equipment at hotels", he adds.

However, Robert Brotherus from the Union of Freethinkers of Finland feels that The Bible does not belong to a hotel room "any better than a cookbook does". He believes that anyone wishing to read the scriptures on their travels will buy their own copy.

To which I would respond to the "Freethinker" - if Robert Brotherus truly believes in "Freethinking" then what is he so afraid of?  Doesn't it stand to reason that if he really believes in "freethinking" that a person who is in a hotel has the "freedom" to think for themselves concerning whether or not they should read the bible?

It's organizations like the ACLU and these "Freethinkers" who have closed minds. There is nothing "free" about trying to ban the world's best selling book and most influential book in history.