Today I wanted to start out our week sharing with you some of the latest news from Vietnam and the attack on the house church that I mentioned late last week in this post.  According to The Voice of the Martyrs sources, "Believers were making repairs to the house where they meet for worship when attackers mercilessly stormed the building. Christians were seriously beaten with nightsticks, numchucks and electric cattle prods. Among those attacked were 10 pastors, youth group members, and other house-church members." (church pictured)

The VOM sources also report, "During the attack, Pastor Quang was shocked with an electric prod and clubbed with a nightstick. Nguyen Hieu Nghia, a church worker, was also struck with a nightstick and kicked in the chest, and Tran Minh Hoa was beaten and forcibly pulled down from the roof. The repairs done to the house church were torn down and authorities confiscated all of the construction materials. As neighbors looked on, eleven of the Christians―including former prisoners Pastor Quang, Pham Ngoc Thach, Nguyen Huu Nghia and Le Thi Hong Lien―were arrested, handcuffed and dragged to the Binh Khanh Ward Office in District 2, where they were beaten and interrogated for hours."

The following are pictures directly from The Voice of the Martyrs. 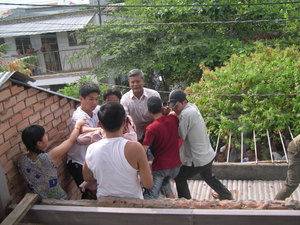 This picture depicts Christians who are trying  to protect Pastor Quang from hired thugs as police enter from right. 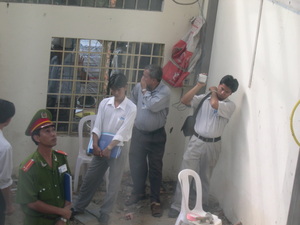 This picture depicts the police standing by and doing nothing as the house church is being raided. This is a picture of one of the Christians who was beaten during the raid.

And this picture is a of the church after it was partially destroyed. 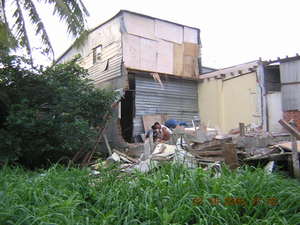 Friends, please remember these saints in your prayers, and ask a friend to pray and tell them about The Voice of the Martyrs so they can stay informed.